Inside the premises of the Allahabad fort, there are the highly auspicious tree Akshayavat which belongs to the period of Ramayana and Rishi Markandeya. The history behind why this holy tree is inside the Agra fort is rather more interesting. Also, during the Ramayana Kaal Goddess Sita worshiped this tree for the better luck of family. As per belief, that this tree was on the east of the Ganga river. Also, as per another believe it is the same tree on which Lord Krishna used to play for most of the time during his childhood. Also, there is another belief about this holy tree. As per belief, once the sage Markandeya requested lord Vishnu to show the divine power. Then, Lord Vishnu made the whole universe immersed under the floodwater. Even at that time, the upper part of this tree was still visible.

Very near the Akshayavat, there is a Pond “Kaamkup”. About this pond, there was a belief that committing suicide to this pond, give the “Moksha”. So, lots of suicide attempts made during the period of King Akbar. Therefore, as a King, to stop this ritual, Akbar decided to include this pond, and Akshayavat too inside the Allahabad fort campus. 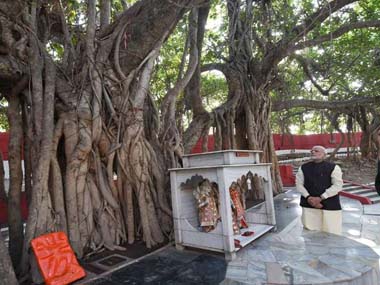