The Spiritual Kumbh Mela in India: – A Complete Guide 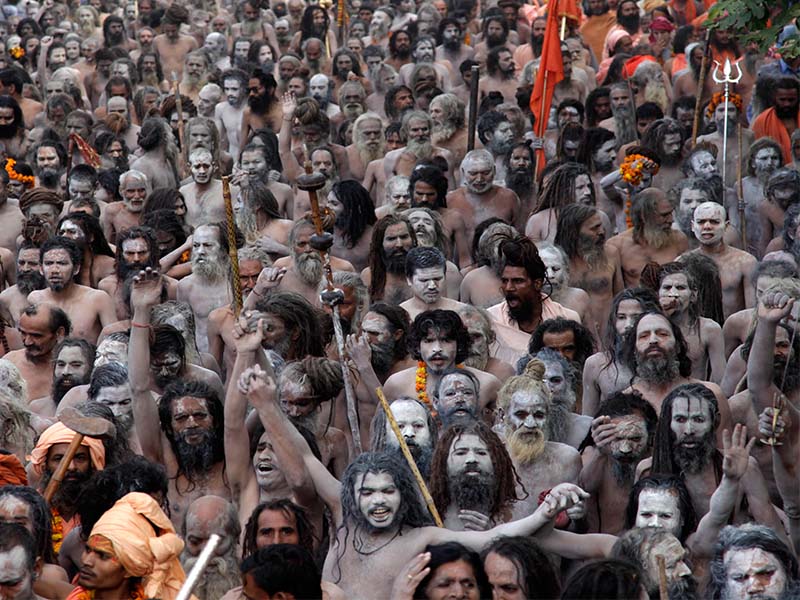 The Kumbh Mela in India is highly spiritual and has never-ending popularity. It's the greatest and most sacred festivals in Hinduism. Not only in the Guinness World Records, but also in all other record books, it's only the Kumbh Mela which have the title of having a largest religious gathering in the world. Not only Indians but people from all around the world join this holy festival to show their devotion. Millions of people attain it.

Even the UNESCO could never ignore the importance, the never-ending divine beauty and the humanity of this place, and therefore, in December 2017, UNESCO included this auspicious Kumbh Mela on its Intangible Cultural Heritage of Humanity list.

There are four holy Hindu religious places in India where this Kumbh Mela takes place on a rotational basis.

When does Kumbh Mela Occur?

In each of the locations mentioned above, this holy Mela takes place at the interval of every 12 years. Therefore, mathematically, this Kumbh Mela occurs at the interval of every three years. However, the typical astrological and religious calculations decide the place and the time for this holy festival. It simply means that this Mela sometimes happens only a year apart at different locations.

No one can ever doubt the auspiciousness of this Maha Kumbh Mela. It always occurs in Allahabad. But, the Ardh Kumb Mela takes place in both Allahabad and Haridwar.

When to happen the Next Kumbh Mela?

In 2025, the Maha Kumbh Mela will take place in Allahabad

In 2027, The Kumbh Mela will take place in Nashik

The Legend Behind the Kumbh Mela

As per various Hindu's sculptures, gods once lost their strength, after the curse of sage Durvasha. In order to get back their energy, all the gods along with demons decided to do the Samundra Manthan so as the get the Nectar Pot. This pot was to be shared equally between them. However, Gods were familiar with the facts that the immorality of demons many never be good for this universe, and therefore, a fight broke out, that ran on for 12 human years. During the battle, the Waahan of Vishnu "Garuda" flew away with the Kumbh that held the nectar. During his flight, a few drops of nectar fell at Prayag (Allahabad), Haridwar, Nashik, and Ujjain. From that time, all these places became famous as the destination for the Kumbh Mela. Therefore, all these places are of utmost importance.

Kumbh Mela and Sadhus There

Various types of Sadhus are the most important and the sacred attractions of this place. it's your good luck if any of them bless you. devotees come here to listen to these men so as to get spiritual enlightenment.

The various types of sadhus here are:

They cover their whole bodies with Ash and have long matted hair. Due to the constant exposure to the weather, their bodies become able to face the extreme temperature too. Their eyes are bloodshot from Because of the constantly smoking charas (marijuana), They eyes are bloodshot. They believe that taking Charas aids enlightenment.

These Sadhus do the tough penance and make their body capable of bearing the unbearable pain.

These Sadhus maintain the Maun Varat or the "Ritual of being Silence", and never even utter any words.

These Sadhus stand vertically on their head and do the meditation.

These Sadhus spent their life on river banks, and devote their time in doing various spiritual activities such as meditation, performing rituals, and bathing numerous times a day.

Rituals that devotees perform at the Kumbh Mela?

Taking the holy bath is the main ritual. As per belief, taking the holy bath on the most auspicious day of the new moon will end up their and their ancestors' sin, so as to be free from the cycle of rebirth. From the early morning at 3 O'Clock devotees start bathing here.

After the rise of the sun, the different groups of sadhus move in a pre-decided Pattern towards the river to have the bath. Usually, the Naga Sadhus bath at very first, while other groups compete with each other so as to get the early chance of bathing. This is really a magical moment.

After taking the bath, the devotees put-on the fresh clothes and proceed to worship by the river bank. After that, they reach to various Sadhus so as to listen to their "Anmol Sadhuwaad"

How to Attend the Kumbh Mela

From the tourist point of view, the Kumbh Mela is an unforgettable experience, and most challenging too. Therefore, authorized authority does dedicated arrangements, especially for foreigners. Luxury tents with attached bathrooms, guides, and assistance for excursions, are provided in the Special tourist camp. Also, unbeatable tight security is provided.

To have the holy view of the biggest gathering of various sadhus, it’s necessary to make sure that you're there for a Shahi Snan (Royal Bath) on a pre-determined auspicious date. On the basis of astrological calculations, the dates of bathing are announced long before the date of Kumbh Mela occurs.

Another most attractive thing to watch out here, is the arrival of the various groups of sadhus, in procession with much fanfare. It happens at the start of the Kumbh Mela.

Seems very Interesting thanks for providing these details.

The information is really very knowledgeable. i was in kumbh mela allahabad and it was really well organized.

this is so fantastic m really excited about kumbh going on so soon!

To attend Kumbh Mela is life time Achievement
One can see uncountable NAGA SADHUS & MONKS In a Single place which is kumbh mela.
You cannot believe in your eyes when you see SHAHI SWARI of AKHARAS on SHAHI SNAN dates

My experience with the Global Connect Hospitality is very good. We have booked the Super Deluxe Tents with them. All the arrangements was perfectly done. Staff at the camp were very carrying. Amenities inside the camp was provided as promised.Great job people!
Devesh Sharma
I had enjoyed my journey to Kumbh Mela at Allahabad with Global Connect Hospitality. Their arrangements at Camp was really appreciated. The food was very tasty and accommodation was also very good. Good Job Team.
Ajay Jindal
It was my first trip to Kumbh Mela but I felt I had arrived earlier as well. Global Connect Hospitality Staff were welcomed me at the Railway Station and transferred me to Camp. I was treated like a special guest. All they made my tour was unforgettable. Great services!
Anil Agarwal
Superb arrangements were made to stay in comfortable manner for the Kumbh Mela. This time more than 24 crore people visited. It didn't look as if it was temporarily made on the river front which becomes dry during this time of the year.
Shobhna Vora
Fantastic arrangements made by Rajesh and team. Excellent service by Global Kumbh village. Can't wait for the next kumbh. Special mention about Ajay for the motivation to walk. Also the Bhandaris took special care of me with regular checks …!
Balaji Ranganatha
Har Har Mahadev. I am writing this review sitting outside the tent at Global Kumbh Village. The tent is clean. The quaint washroom facilities are 👌 there is a lady appointed to clean the room and washroom twice a day. Basic food is available and it is tasty too at the make shift restaurant inside the tent area. They operate under the bharat seva shivir name.the ghat is far away and we paid 100Rs for the ride to the ghat. Anyway people are here for the kumbh.the kumbh is a magical experience. Its amazing to see the seamless way things move here . Yesterday we had our dip at the triveni sangham and offered prayers to our ancestors. Signing off for now. Now going for a ride in the Ganges. Will catch up with all of you later. Jai Ganga Maiya
Prabha Sreenivasan
wpDiscuz
×